Saturday 30 June 2012, the date of the twentieth edition of the Dunwich Dynamo, a night ride from London to Dunwich, the lost city on the Suffolk coast. 1500 years ago Dunwich was the capital city of East Anglia but in 2001 the population of Dunwich was just 84; much of the town was swept away in a storm surge on 1 January 1286 and now little remains on the land. There is, however, a great beach, and a good pub 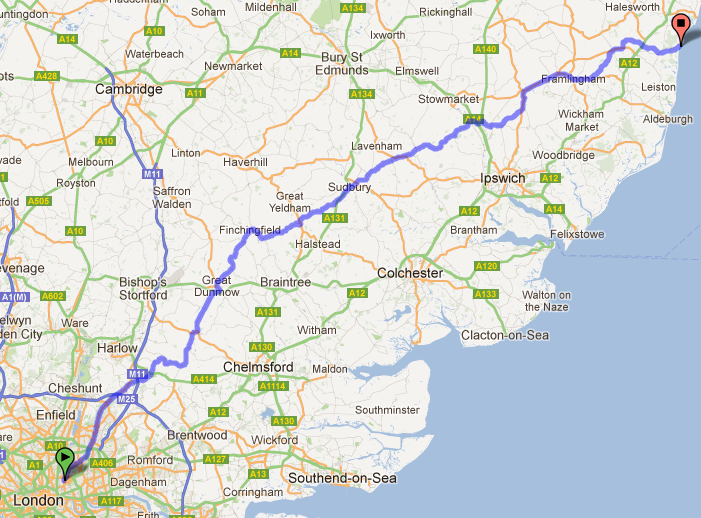 The Dun Run is proud of its rather anarchistic roots. There are no entry fees, if you want to do it just turn up at the Pub in the Park, London Fields and start whenever you feel like it during the evening. 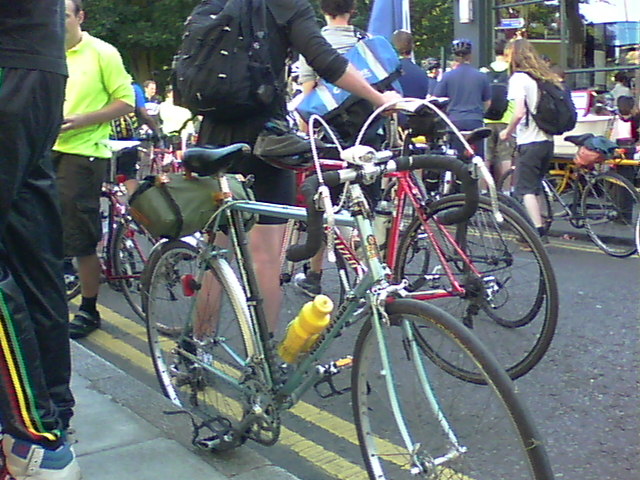 The date was well chosen as 30 June was the night of the full moon and close to the longest day of the year. I rolled up at around 7pm and there were already well over a thousand cyclists there. In the crowd I met Wernher who I’ve ridden with before, and as he had completed the ride five times before it seemed a good idea for me, as a Dunwich Dynamo virgin, to accompany him. Magically some organisational fairies had printed a route sheet, so I dropped a pound in the bucket for a copy, and we departed at about 8:30 pm.

The ride through London out to Epping was amazing in the company of hundreds of cyclists stretching as far as you could see both ahead and behind. Progress amidst all the London traffic was pretty slow, though everybody seemed to be in good humour.

It started to get darker as we rode through Epping Forest, all the pubs along the way seemed to be packed with cyclists. And in darkest Essex people in remote villages were sitting out by the roadside and clapping and cheering the riders. My only nasty incident was hitting a pothole when freewheeling downhill near Dunmow. The force of the impact moved my handlebars round by some distance, which was probably a good thing as it must have absorbed some of the impact rather like a crumple zone in a car … better than folding my front wheel anyway. Earlier in the day I had inflated my tyres with 6 bar / 90 psi in front and 7 bar / 100 psi in the back tyre, so I didn’t get a pinch puncture either. It was a lucky escape and I was glad I was well balanced and freewheeling; it would have been much more tricky with my legs flailing around on a fixed wheel. Scary. I was riding close to the centre of the road, but never saw the pothole. (Note for future – must use better lights next time, <envy> some of the lights on this year’s run were astonishingly bright </envy>.) Some say that 36 spokes in a front wheel is too many, but on this occasion I was glad to have all the help and additional strength I could get and felt thankful I wasn’t riding a 20 spoke racing wheel with 44% fewer spokes. It was probably the same impact that shook my back mudguard out of the clip that secures it to the chainstay bridge that I had to fix when I noticed the problem later on. Otherwise though we had no mechanical incidents

Some of the guys were enjoying themselves by flying along in a swoosh of tyres at racing speed; very impressive but I’m not really sure of the point of getting to the beach in the early hours. And they probably missed the novelty of bats flashing across your line of vision as they were briefly illuminated by the bike lights. Kudos on this ride seems to derive more from how unusual is the bike you ride, rather than how fast you ride it; hence previous rides have been completed on workbikes, a city of London ‘Boris bike’, folders, and even a penny farthing!

There was a rest stop at Sible Hedingham, just under half way, but whatever you wanted involved a substantial queue, so it was lucky Wernher and I had brought sufficient food to cut out the queueing. Again all the pubs around were full of cyclists, avoiding the queues by other means.

The second half of the ride was really nice. The organisational fairies had visited any tricky turnings that might be missed and left a tea light in a jam jar to make sure we had a good chance of seeing the turn. Mind you losing the route was difficult as there always seemed to be a string of flashing tail lights showing the way. In the middle of the night pit stop marquees appeared selling drinks and snacks; the Dynamo generates its own economy! Even the pubs were still open well after their normal closing time – just selling teas and coffees of course

The last pit stop, near Framlingham, was lovely with good company, free tea or coffee and a good range of snacks in the warmth of the early morning sun.

There were no real hills, just gentle undulations and I only used three gears during the whole ride, never using the small chainring. Riding with Wernher made my ride especially easy as he did the ride on his Brompton which was harder work than my circa 1980 Claud Butler 10 speed. I was floating away from him on any uphill bits then taking it easy while he caught up again, so for me it was a real no-strain ride. However the first signpost to Dunwich was a welcome sight. 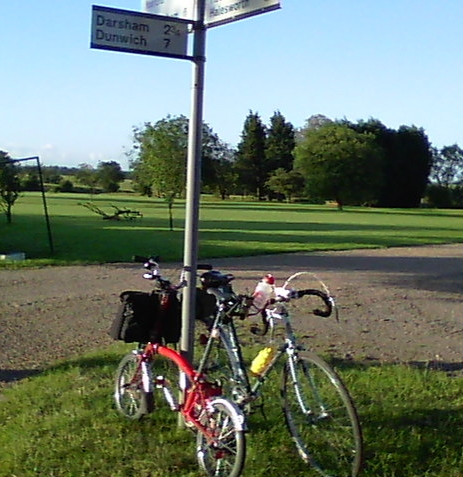 We rolled up on the beach at Dunwich at 6:30 am with 182 km from London on the computer. 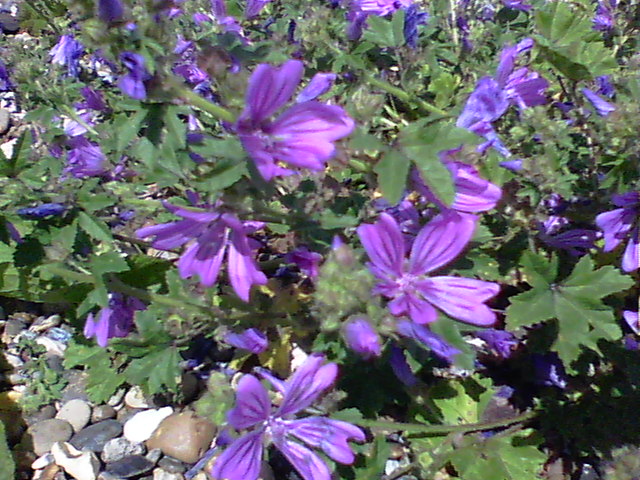 I was ready for a breakfast at the Sun Inn, although Wernher was still suffering from the effects of a dodgy bacon roll consumed during the night so didn’t partake of the fry-up on offer and had a short snooze instead. He rode the Brompton because it was the only bike he owned that had never done the Dynamo; and he wasn’t the only one … there was a fold of about half a dozen Bromptons, very smartly attired, who completed the ride only a bit slower than us. Some recumbents and tandems added interest to the range of machines on display, and this being a London-centric ride there were many fixed wheel and single speed bikes which are not a bad choice for this ride.

Apart from a very brief period just before dawn I hadn’t felt tired during the ride, which was great as I have bad memories of getting sleepy and having hallucinations on some night rides. Starting in the evening made it easier, much better than finishing at everybody else’s breakfast time after some 24 hours riding, or trying to ride two nights without sleep (I won’t try that again). And of course it was a short night, the Northern sky went very deep blue, but never really got dark. The full moon illuminated the ride for most of the night, although it clouded over for a while before dawn. At Dunwich there was the amazing sight of hundreds of cyclists on the beach; 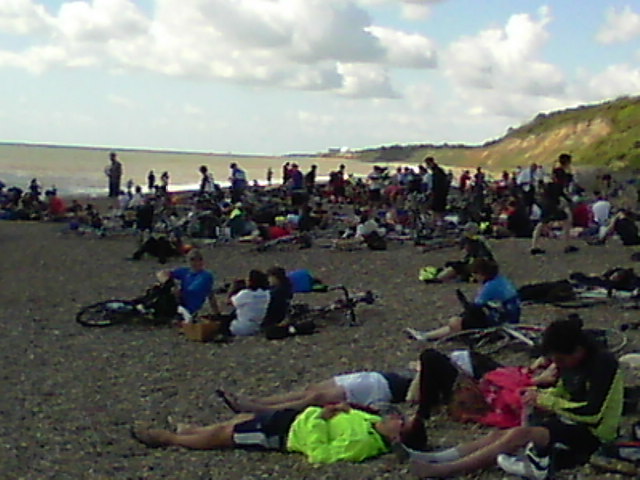 many of them asleep, but quite a few brave souls were having a swim in the dreadfully cold North Sea. (No I didn’t.)

Southwark cyclists had organised coaches to take participants back to London, and accompanying lorries stacked full of their bikes. I had pre-booked a ride and caught the 11 am bus back to the smoke. There was much that could have gone wrong with these arrangements, especially given the number of participants, but thanks to meticulous organisation that was never officious or unnecessary the operation was very smooth. As an exercise in logistics I’d say it was a triumph. Southwark Cyclists could run London so much better than the Mayor! The only thing that let down the organisation was a nasty scuff on my handlebars due to some very clumsy packing in the lorry that must have left my handlebar rubbing against something metallic.

Overall the ride was better than I expected by some margin. I’d expected to be sleepy but wasn’t. I took it easy all the way round so there was no physical strain either. No rain and a favourable wind helped a lot of course, and apart from twisting my handlebars and shaking loose the back mudguard there were no mechanical issues either, so luck was on my side. Above all though it was a great pleasure to share the ride with so many other cycling enthusiasts; the spirit of the ride was not (in general) trying to ride as fast as possible, it was very much a fun run. I’d heard so much about this ride I felt I should do it once, but having enjoyed it so much it won’t be a difficult decision to do it again.