What makes a good quality bike ride? There are so many factors … the terrain, the scenery, the company, the bike, the distance, the weather, the desire to get out there and ride.

Today’s ride was relatively short, I was alone, the bike was my fixed wheel, the weather was OK, although in comparison with the last couple of weeks, today’s weather was fantastic. I’ve been off the bike for over a fortnight having spent a week in Wales where the weather was cold and the roads were icy, and a week in London where I didn’t have a bike

So I was most definitely up for a ride after such a long lay-off!

I left home at 10am under grey skies, and almost immediately things were looking up when I ran into a ‘Road Closed’ sign due to flooding. 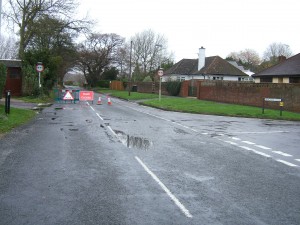 I took this as an invitation to enjoy some traffic-free riding. And so it proved, West Lane on Hayling Island can be something of a racetrack for vehicles aiming to get off the island quickly, so riding car(e) free was lovely. I knew the flooded part was at the Northern end of the lane so turned right along Daw Lane and crossed the main road into Yew Tree Road and Copse Lane, where I found another Road Closed sign – this ride was definitely looking very positive 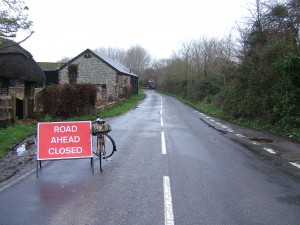 In fact the road closed notice was completely spurious as there was nothing worse than some big puddles all the way to the bridge onto the mainland.

My route went through central Havant then North through Rowlands Castle, Finchdean and past the isolated church of St Huberts at Idsworth, before turning right through woodland and sheep farming country to Littlegreen school on the B2146

where I turned right again to cycle into the rather lovely downland village of Compton where there is a great tea room, and as a bonus two friends, Alison and Geoff arrived at the same time as I did. 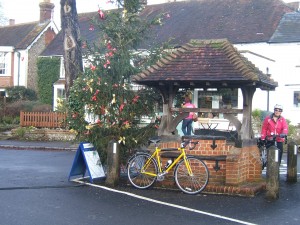 We spent a pleasant half hour catching up on news and chatting over tea and cakes. Alison and Geoff set off to follow my incoming route and I headed further into Sussex on the quiet lane to Up Marden. As the name suggests this was the highest point on the ride at 151m, and the steepest climb too at 10% which is no problem on my lowish fixed gear of 42/17 or 66 inches.

The church of St Michael at Up Marden is a gem. 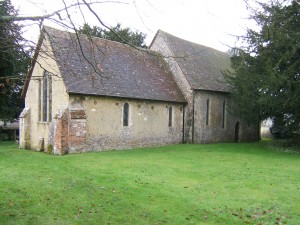 It is an unspoilt 13th century building invisible from the road; the approach is along a bridleway. The church has no electricity so candles are still used for illumination. This must be one of the most peaceful places in Southern England, and it’s easy to believe that little has changed here in hundreds of years. I usually stop here just to enjoy the calm, and the feeling of stepping into a timeless place. According to Ian Nairn and Sir Nicholas Pevsner, writing in ‘The Buildings of England’:

St Michael. One of the loveliest interiors in England. Atmosphere is perhaps something which ought not to have much to do with ‘The Buildings of England’ but at Up Marden the atmosphere is as tangible as any moulding, the slow, loving, gentle accretion century by century until it is something as organic as any of the South Downs views around it. It must not be seen in antiquarian terms, or even as an interesting speciment of an unrestored church but as visible loving testimony of the faith of successive generations. It is incredibly moving … 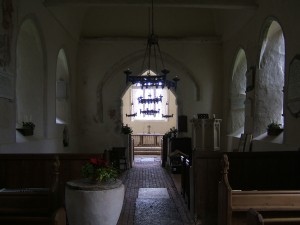 Although the church dates from the 13th century, it seems likely that the site was a place of religious worship in earlier times.

The bridleway to the church had left my wheel rims plastered with mud. On the ride downhill from Up Marden to Walderton I was able to keep the speed down with back pressure on the fixed wheel, avoiding grinding down the rims with the equally muddy brake blocks. Another flood across the road at Walderton washed the wheels a bit, but not at all clean – that mud is sticky stuff.

Heading towards home, my route took the narrow lane past the Racton Monument. 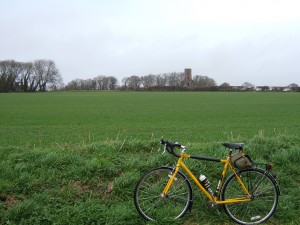 Feeling in need of lunch now, I went the quick way along Emsworth Common Road, back through Havant and down onto Hayling Island where Northney Road / Copse Lane, Daw Lane 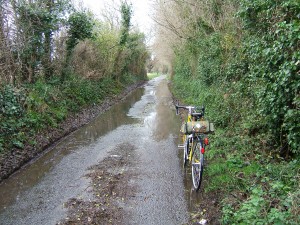 and West Lane were still closed due to floods, but in fact, after 8 hours of drainage since the last rain, were easily passable by bike.

I’ve ridden fixed wheel bikes for (gulp!) over 50 years now (I was an early adopter), and still I have a love/hate relationship with fixed. Today I loved it. The feeling of control, especially at low speeds through the floods, is something unattainable on a freewheel. I got round the whole 55km ride without using my brakes once, back pressure on the pedals was enough for all my slowing and stopping, and given the filthy conditions today that is a great rim-saver. The 66″ gear got me up all the climbs relatively easily, and enabled me to go slow on the downhills. So what about the hate part? Steep downhills are the worst. For me discretion becomes the better part of valour at around 180 pedal revs per minute; on a 66″ gear that’s about 57 kph or 35 mph. It’s the speed when I worry about my knees exploding. However it isn’t the speed so much as the revs that demand 100% concentration (99.9% isn’t good enough) and the prospect of something going wrong at those speeds with a fixed cog and legs whizzing round is inhibiting, to put it mildly. Also I like freewheeling. It’s a joy to whizz down hills powered only by gravity, and all that concentration can be focused on picking the optimum lines through the bends (which are not the same as fixed wheel lines anyway). Unless riding with a number of other gear-deprived riders, the fixed wheel seems a bit anti-social; you tend to climb faster than those who reach for low gears, which might seem like showing off, and on the downside of the hills you aren’t always able to keep up when riding a low gear like mine. However today I rode at my own pace and it was a joy. It may have been only 55 km, but I saw little traffic, the views were fantastic, having tea with friends was great, the visit to Up Marden church was a treat, and the bike rolled silently and problem-free all the way. That’s a quality ride